Notes from the field

“It was a cold and windy November day in Iceland. In my experience, pretty much every day is cold and windy in Iceland! This is the country where we spotted folks wearing full snowmobile suits while they casually strolled the streets in the capital city of Reykjavík, after all.

My wife and I were touring the southern coast of the island, stopping at waterfalls, exploring black beaches, and admiring gorgeous rock formations. We timed the day to catch the sunset from the Dyrhólaey Peninsula, and the results were spectacular! As the sun set, it gently illuminated the whitewashed walls of the lighthouse, while the ocean faded into shadow in the background.” – Charles Cockburn

About the Dyrhólaey area

Dyrhólaey is a nearly 400-foot high headland that juts into the ocean at the Southernmost point of Iceland’s mainland. The area is particularly dramatic, with needle-like columns rising ominously from the sea and massive arches, carved over millennia by the waves, undercutting the peninsula. Dyrhólaey, which means “door hole” in Icelandic, is named for largest of the arches.

The “door hole” for which the Dyrhólaey area is named.

Getting to the Dyrhólaey Lighthouse

The Dyrhólaey Lighthouse, or Dyrhólaeyjarviti in Icelandic, is an easy drive south on the main highway – Ring Road 1, from Iceland’s capital city of Reykjavík. Look for a marked right turn to road 218, which will take you to the parking lot. From here it is a short hike to the lighthouse.

From Reykjavík, the drive time to Dyrhólaey is about 2 1/2 hours, however, there are many, many stunning locations along the way that you will want to visit (look for future articles about a few of the other must-see sights). If you are staying in Reykjavík, plan to take at least an entire day to explore the southwest Icelandic coast.  The Dyrhólaey area is near the coastal town of Vik, which makes a great turnaround spot for a full day trip of sightseeing, or a good place to stay the night if you are continuing around the island.

The Dyrhólaey Lighthouse is just one of the stunning features of the Dyrhólaey area. During your visit, take some time to hike around. To the east, take in the views of arch, for which the area is named, and beyond that, the Reynisdrangar Needles – a grouping of large basalt sea stacks rising ominously out of the surf. 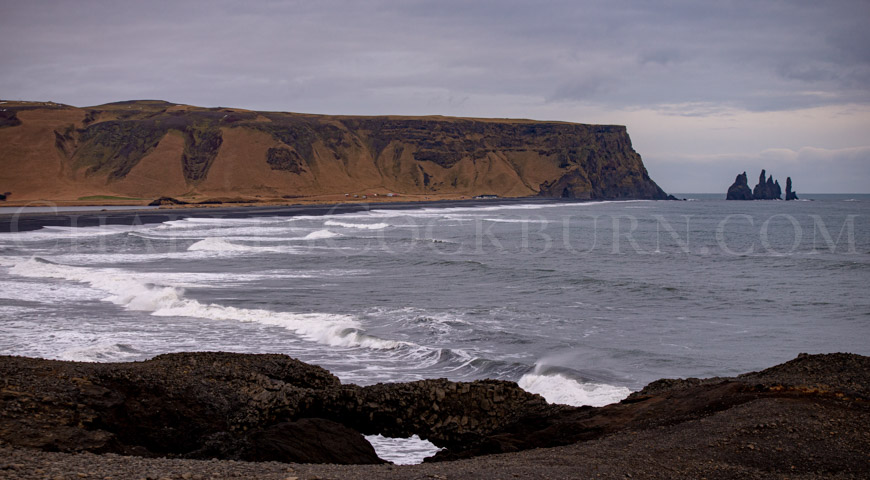 The Reynisdrangar Needles as seen from the Dryhólaey area.

Turning to the west, you will see a black sand beach that seems to stretch on for an eternity until it fades into the distant mountains.

Keep your eyes out for a variety of North Atlantic birds. If you are there during the summer, you will likely spy a puffin!

A short drive further east on Ring Road 1 from the Dyrhólaey area will take you to the exit for Reynisfjara Beach, where you can explore a massive formation of basalt column steps emerging from the beach. From here you can get a closeup view of the Reynisdrangar Needles, as well as take in an impressive view of Dyrhólaey from below. 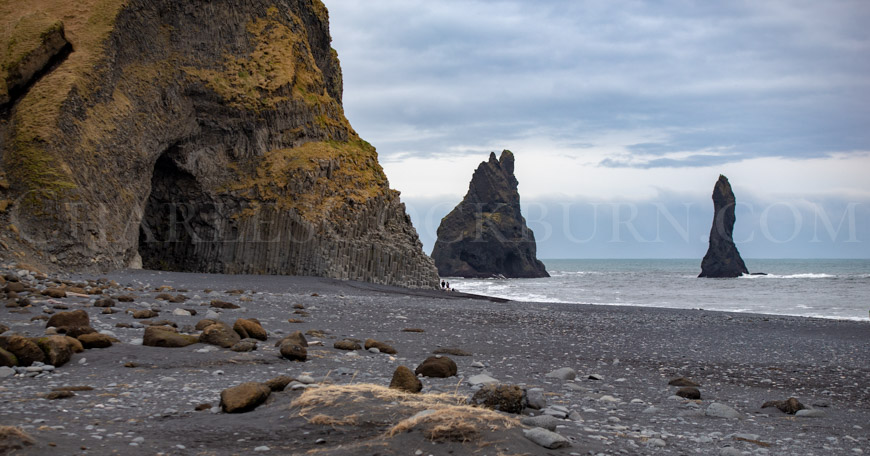 What to bring to the Dyrhólaey Lighthouse

Photography gear – the Dyrhólaey area is all about wide, expansive views so plan on bringing a wide-angle lens and a telephoto lens at a minimum. The white walls of the lighthouse make a great backdrop for portraits, so if you are taking photos of people, you may want a portrait lens, as well.

Clothing – expect the weather to be cold, constantly windy, and wet. Waterproof outer layers and a warm hat and gloves are a must. It is also wise to have thermal base layers on or available.

Food – The nearby town of Vik offers a few restaurants, but for the most part the southwest and southern coast of Iceland doesn’t have an abundance of places to eat. I recommend packing a hardy meal or two, and some snacks, and having a picnic overlooking the ocean.

It may be cold, but the wind can be quite dehydrating, so pack plenty of water, as well.

The Dyrhólaey Lighthouse sits atop a nearly 400-foot high headland in the distance.

Click on a link to learn more.
Some of these may be affiliate links, meaning that if you click a link and make a purchase, I may earn a small commission at no additional cost to you.

About the Author: Charles Cockburn

Hey! Chuck here, the man behind the camera at Charles Cockburn Photography. I’ve been passionate about exploring nature’s beauty through photography since I was a kid running around the forest with my family in Oregon. I especially enjoy venturing to remote and unique locations and photographing scenic landscapes from a fresh perspective. When I’m not out searching for photos, you can usually find me exploring the backroads and wilderness trails of the Pacific Northwest on my mountain bike or motorcycle.

These are amazing times and this strange new world can leave us feeling out of sorts and lost. Our hope is that the images and stories here at CCP will be a source of inspiration and beauty for you and your family. Stay healthy & safe friends!

COVID-19 update: we are still open for business, though production times may be slower than normal | FREE shipping on all orders over $100! Dismiss